This bird has ruined a thousand lives.

I still remember the first time I heard about Twitter. I was eating lunch with some coworkers in ’07, and one of them dropped the name of the then-new site.

“What the heck is Twitter?” I said, wiping mayonnaise from several orifices with my sleeve.

“You know those ‘status update’ thingies you can make on Facebook?” she said.

I figured Twitter would be dead in a week. What use could anyone possibly have for such a pointless service?

Of course, two years later I created a Twitter account. I was at a point in my life where I was taking my career as a film critic somewhat seriously, and there seemed to be a consensus that Twitter was a good venue for self-promotion. So I began “tweeting,” as the kids on the street call it.

Yeah, this exists. I am ashamed.

I used it on and off for a while, but I grew bored of it quickly. I didn’t get it. I couldn’t figure out why anyone ever bothered to even log on, let alone read tweets. I got nothing out of it, so I stopped coming. Twitter was boring and pointless. There was no way it would last.

And yet, it still did. The unwashed masses kept “tweeting.”

Flash forward to a couple months ago. Twitter had refused to go away, and Lent was coming. I figured I’d give up Facebook, because like all members of the class of ’07, I still wasted entirely too much time on that particular site. And for penance’s sake, I thought I’d make Twitter my new timesuck for the next 40 days. After all, it was still a thing that people used; there must be something good about it. Right?

Nah, not so much.

I’m sure this will make me terribly unpopular in Internet-land, but I still really, really hate Twitter. And I think you’re a big stupid-face if you like it. So there. But since you’re still reading this (apparently), let me list a few reasons:

1. It’s just a thousand idiots shouting their opinions in a crowded room.

This would be hilarious in context. I promise.

I know you can say this about a great deal of the popular websites out there (including, yes, the blogosphere), but the difference is that this is literally all Twitter lets you do. Facebook (to which I remain loyal, despite the creepy Evil-Empireness of the whole operation) actually encourages a two-way exchange of information. When you read the Facebook post of a friend or well-wisher, there’s a box right below it inviting you to share your input. Then when you and others comment on it, it organizes your thoughts into a neat little conversation that can be easily read (or not) by someone scrolling through their newsfeed.

I know Twitter technically allows for replies, but it’s a convoluted process that feels painfully like an afterthought (which I’m pretty sure it was). If I want to reply to someone’s post, I first have to click it to see if there is already a conversation going on, then I have to reply and type a message that begins with “@somedudeontheinternet” (robbing me of precious characters in addition to my dignity). Then the post goes to my tweet feed, not his — and the same thing happens if he replies to me. The effect is, to unnecessarily belabor the metaphor, that of two people shouting at each other over a cacophany of morons. It takes a great deal of effort to follow a conversation, and it’s rarely worth it — mainly because…

Polonius will disagree with me on this, but I just don’t see any real sort of advantage to enforcing a character limit on posts. If you disagree, try making a room full of middle-schoolers write haikus some time. (Actually, don’t. You’ll thank me later.) What you get is some banal sentiments awkwardly shoehorned into a format that in no way enhances them. Twitter is very much like that, except with the adults in the room embarrassing themselves.

Look, I get it — Twitter was inspired by blogging, and it was designed to correct the problem of bloggers going on and on and never shutting up (sorry). But the thing is, the Internet already rewards brevity. There’s no need to enforce it. If I’m reading a boring blog post and I see that it goes on for 20 pages, I stop reading it. If I see that one of my Facebook friends has taken seven whole paragraphs for a rant about gay marriage (an issue on which pretty much nobody has an interesting opinion), I skip it. I don’t need a robotic nanny protecting me from the dangers of long-windedness.

So the 140-character limit in no way saves anyone time. What it does do is ensure that most tweets are borderline incoherent, with wrd abrevs and CreatvSplngs. This has the effect of wasting even more of my time, because it takes at least as long to decode these tweets as it would to read them spelled out as whole words. Which really just as insult to injury, because…

3. Nobody on the whole freaking website has anything interesting to say.

Seriously, dude. Give it a rest. Nobody cares.

I’m not so deluded as to think that all of my Facebook friends are great writers. But at least those who are lousy at writing are capable of taking interesting pictures, or linking to cool pages, or shouting hilariously uninformed political opinions. Twitter only lets you post 140-character sentences, and, just as very few people can write brilliant haikus, very few people are any good at making 140 characters interesting.

I remain firmly convinced that, while there are 200 million people tweeting, almost none of them actually bother to read tweets. Like I did, many fools have taken the old “Twitter is great for self-promotion!” maxim to heart, and use Twitter only to promote themselves. The result is that your Twitter feed is routinely filled with junk like “See me perform at the #SweatyArmpitLounge in NYC tomorrow night!” It’s entirely possible that people exist who care about Tweets like that, but since I don’t live in NYC and have no desire to go to the Sweaty Armpit Lounge, I immediately regret wasting the time it took me to read the tweet.

I’m sure someone’s going to tell me I’m just following the wrong people. Well, maybe. But I really made an effort. I promise. For starters, I made a point of following anyone and everyone who seemed even remotely interesting (and if any of them got on my nerves, I unfollowed them). Then, from there, I started building a list.

The list I built was called “PeopleWhoAreInteresting,” and you can see it here. The sole criterion for making it onto this list was to compose a single tweet that didn’t bore me. Something that made me laugh, or think. A link that I didn’t regret clicking on. Literally, anything that didn’t make me wish for the three seconds of my life that I spent reading it back.

Twenty. I found 20 people worth following on Twitter, and that was by defining “worth following” as loosely as I could. Even now, when I look at the list, most of it is tweets I don’t really care about. Most of the time, all I see is a sea of indechiperable hashtags, usernames, and URLs. Maybe they’re linking to something interesting, but…

4. The system for sharing links is totally broken.

Indulge me one more Facebook comparison. (I’m really not a fanboy; I just get a dollar from Zuckerberg every time I say something nice about it.) When I share a link on Facebook, it’s really easy to get people who would be interested to click it. Facebook automatically uploads the title of the document and a thumbnail picture. Then I have free reign to write whatever sort of commentary I want. For instance, if I’m posting something about Joel Osteen getting caught in a compromising position with a set of midget hermaphrodite triplets, I can write a joke about his horrible toupee if I want, and, based on the context, people will get it. Or, if I prefer, I can let the link speak for itself. 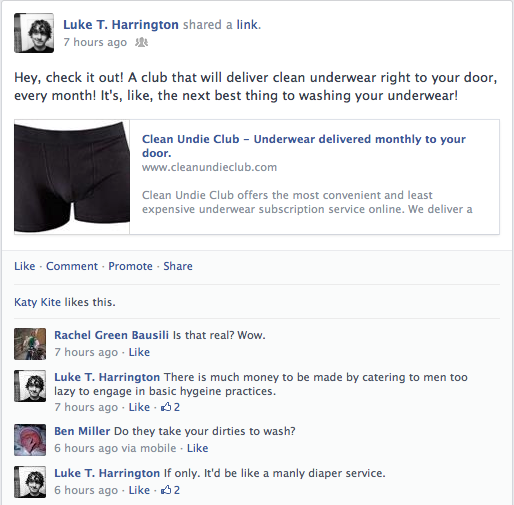 This moment? Never could’ve happened on Twitter. And that makes me sad. 😦

On Twitter, there is no such freedom. For starters, the link itself takes up 22 characters of my tweet. Then I have only 118 remaining to give someone a reason to click the link. I have the choice to either tell people what the link actually is or say something witty about it, but I can’t do both. There’s just not room. And there’s no preview included, so I have only those 118 characters to sell someone on the link. If I wanted to, I could probably get really good at doing that, but what would be the point?

5. A few more things that just really bug me.

1. The way that every time you follow someone they send you a (probably automated) “private message” saying, “Thanks for the follow! Check out [shameless self-promotion]!”

Because, seriously. I took the time to follow you, so I obviously know who you are and what you’re up to. And if I don’t, some soulless spam probably isn’t going to change that. It will just serve to remind me what a lonely, superficial place Twitter is.

2. All the pastors whose bios read, “Husband, father, and oh yeah, I pastor this church.”

This is, like, a thing. Every pastor on Twitter has a bio like this. (It’s almost enough to make a dude want to go Catholic, just to avoid clergy who won’t shut up about their families.) I mean, I kind of get it: You’re called to be a husband first, and a father second, and a church leader third. But seriously: You have 160 characters to give me a good reason to follow you; unless you work in one of a handful of very specific industries, your ability to procreate doesn’t interest me.

3. People who say, “I get that not everyone likes Twitter, but, y’know, I use it for news.”

Because, really? You need Twitter to get your news? Doesn’t the New York Times already have a website? Aren’t news aggregators already a thing? What, exactly, does Twitter bring to the table that you couldn’t get from a thousand other websites?

The point is, I just really don’t get it. I’m not saying Twitter is the Worst Thing Ever, but I will say I’m apparently blind to whatever it is that I’m supposed to like about it. I’m forced to conclude that there must be something about it that I’m missing. I’d like this blog to be a little more than The Luke Show, so I’ll turn it over to the comments: What is it I don’t get about Twitter? What’s supposed to be so great about it?

Hey there. I'm a writer and humorist out in Tulsa, OK. Maybe you've read LOL Interwebz, the column I used to write for Christ and Pop Culture, or maybe you've seen the stuff I've written for Cracked and BuzzFeed.

My non-fiction debut, HOLY SH*T! The Dirtiest Bits in the Bible, is in the works.

Things are a little slow on my blog these days, because people keep giving me paid writing gigs. (I know, weird, right?) Still, I keep it around for those moments when I feel like writing something that no one else would ever publish. Like, for instance, stuff about papal encyclicals and terrible horror movies.

I dream of a day when all will be made new, and when everything will taste like beer. Seriously, someone get on that.

Much Better Blogs That You Should Probably Be Reading Instead: